Comfort Inn Near University of Wyoming
Se alle detaljer
Renlighed
9,4
Comfort
9,3
Beliggenhed
8,7
Tjenester
9,0
Ansatte
9,4
Samlet 9,1 Fantastisk
Baseret på 157 bedømmelser
Alle anmeldelser
Renlighed
9,4
Comfort
9,3
Beliggenhed
8,7
Tjenester
9,0
Ansatte
9,4
Fantastisk 10,0
Fordele: Great front desk staff. Good location.
God 6,0
Fordele: Location. Staff.
Ulemper: I decided to use this hotel since my previous stay was great. I had a room with an extra space (living rm). Thought that they would be all the same layout from location to location. Not true. This one had barely enough room to move around in.
Fantastisk 10,0
Fordele: Everything
Ulemper: Nothing
Fantastisk 9,0
Fordele: All Very Clean! Helpful kind staff.
Fantastisk 9,0
Fordele: Cleanliness and Staff!
Fantastisk 9,0
Fordele: The sweet lady who was in charge of the breakfast room. She was fantastic!
Ulemper: Difficult to find, but otherwise it was great.
Fantastisk 9,0
Fordele: Location,price,and complimentary breakfast.
Fantastisk 10,0
Fordele: Staff were superior across the board. Consistently friendly and attentive to needs. Room was very comfortable and clean (except for tub caulking.) Pool and hot tub were clean and a nice amenity, although pool was a little cool for us. Breakfast was good.
Ulemper: Breakfast was exactly the same every day. We stayed six nights and would have appreciated some variation like whole wheat bread and/or a change in the style of eggs or switch sausage links for bacon. No big deal, though. Great place to stay!
Fantastisk 10,0
Fordele: The staff at the front desk was friendly. Room was clean. Beds were clean and comfortable. Great eggs and we loved the to go breakfast snack bags.
Fantastisk 8,0
Fordele: The desk staff was very helpful, but the poor girl was running the whole place by herself. We needed pool towels, waited for 1/2 an hour, which was not her fault because she was busy checking people in. You need to staff more than one person on evenings.
Fantastisk 10,0
Fordele: I was extremely tired after 15 hour drive. The hotel staff without asking was so helpful, kind, and very professional. The hotel was clean, only a few few from the highway, & had many fresh items for breakfast. Quick checkin & out
Ulemper: No HBO
Fantastisk 10,0
Fordele: Five Star! This hotel exceeded all expectations. The comfy bed and linens to the cleanliness of the room and entire hotel. The breakfast was above a typical continental breakfast. We were greeted with fruited water, iced tea & cookies. Great hotel!
Ulemper: Loved everything! Wish we could have stayed longer. Price was right too! 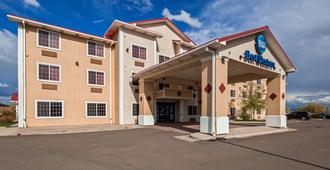 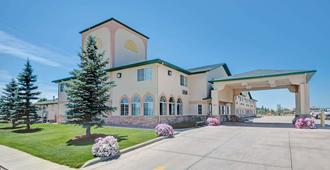 Rangeret #10
Travel Inn
0,0
Dårlig 0,0
Baseret på 0 bedømmelser
Detaljer
Vurderinger
418 kr
Se tilbud
Motel 6 Laramie
Se alle detaljer
Renlighed
7,1
Comfort
6,5
Beliggenhed
6,8
Tjenester
6,4
Ansatte
7,9
Samlet 6,8 God
Baseret på 129 bedømmelser
Alle anmeldelser
Renlighed
7,1
Comfort
6,5
Beliggenhed
6,8
Tjenester
6,4
Ansatte
7,9
God 6,0
Fordele: Pris
Ulemper: Lugt
Fantastisk 8,8
Fordele: Betjeningen er ok
Okay 4,6
Fordele: cheap and only motel available on football weekend
Ulemper: room smelled yuccky and towels postage stamp size not even kleenex in room
Fantastisk 8,2
Fordele: The room we stayed in was very clean and the staff were friendly and helpful.
Ulemper: There wasn't a iron or ironing board in the room and had to check one out from the office. We always had hot water for our showers except for one evening where the shower just would not warm up.
God 6,0
Fordele: It was a place to sleep at a really low price. I didn't expect or need luxuries.
Ulemper: Its pretty close to the highway. They charge for WiFi. 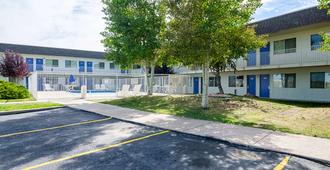 Rangeret #11
Motel 6 Laramie
6,8
God 6,8
Baseret på 129 bedømmelser
Detaljer
Vurderinger
373 kr
Se tilbud
Travelodge by Wyndham Laramie
Se alle detaljer
Renlighed
6,2
Comfort
6,4
Beliggenhed
7,4
Tjenester
5,6
Ansatte
7,8
Samlet 6,5 God
Baseret på 232 bedømmelser
Alle anmeldelser
Renlighed
6,2
Comfort
6,4
Beliggenhed
7,4
Tjenester
5,6
Ansatte
7,8
God 7,7
Fordele: masser af plads på værelserne og dejlig komfortabel sofa
Ulemper: t.v. virkede ikke, og lyset var dødt
Okay 5,4
Fordele: Værelset var rent og tilstrækkeligt
Ulemper: Offentlige områder som gangarealer og indgang var fyldt med cigaretskodder, indpakning, tilfældigt affald, der var hårdt brug for støvsugning. Morgenmadsbaren manglede basale ting som mælk. Hvordan har dette hotel en så høj rating
Okay 5,1
Fordele: Komfortable senge, dejligt personale
Ulemper: Tingene faldt bogstaveligt talt fra hinanden. Brusehovedet blev trukket fra væggen. Varmen gik blev taget en del og de stykker, der blev efterladt på gulvet
Middel 2,0
Ulemper: Lobbyen var lukket, og telefonnummer blev afbrudt. Vi nåede aldrig frem til check-in, og var nødt til at bo et andet sted
Middel 2,8
Fordele: Morgenpersonalet var venligt og virkede bekymrede over vores ophold.
Ulemper: Ydersiden og indersiden af dette motel var meget nedslidt. Billederne på hjemmesiden er meget vildledende. Dørlåsen til gangen var i stykker. AIRCONDITIONSYSTEMET virkede ikke. Morgenmadsområdet var meget beskidt kl. 16:00 og var ikke blevet rengjort fra morgen. Gangene var beskidte. Det var et meget skuffende ophold.
Middel 2,0
Ulemper: I've done a fair share of interstate traveling where it's getting late and you need to find a place to stay fairly quickly. Either the nicer looking hotel is booked, or you're just not willing to pay $150 for the few hours of sleep you plan on catching, so you opt for the much cheaper looking hotel down the road. I have to say, that as far as "cheap hotels" are concerned (which is a laugh because this place was $119 a night) this place was by far the BIGGEST rip off ever. Not only was the hotel dirty and run down looking inside the lobby, the room was even worse. Nearly everything inside the room was broken or barely functioning, from the tube-style TV that didn't get reception, to the horrifically loud AC unit that barely blew cold air...the toilet ran for 15 minutes after flushing and I could have taken a better shower with a garden hose. The "continental breakfast" was also a complete joke, with reused items that I was surprised didn't have mold on them. Just stay away, honestly. It's one thing to be a cheaper establishment, but this place is ripping off travel worn guests that at the very least deserve a much cheaper rate than what they're booking rooms for. Look elsewhere in Laramie, or make the drive to Cheyenne if you can.
Okay 4,5
Fordele: Breakfast included
Ulemper: The breakfast area has half the lights out. It's dark. The room booked was double queen. When brought up to desk clerk all she had to say was all we have are doubles. I don't know why it won't let us fix that online. Sorry. No attempt to fix or even a sincere apology.
Middel 3,1
Fordele: There were a couple of young ladies working very hard, unfortunately they are working in a facility that should be closed.
Ulemper: This was the dirtiest, most unkept facilty that my wife and I, of over 33 years have ever stayed at. They moved us once and I wanted to leave then but felt bad for the young lady that was trying to help us. I wish we would have left because the room had no heat, and in Laramie Wy that is a must. Our room was 40 degrees, we about froze to death. The breakfast was a joke, not that I would have ate anything there anyway but I was hoping for coffee, but there wasn't any. We saw a young family asking for waffle batter but there wasn't any. They left mad; oh and by the way there was a homeless person sleeping on the couch in the hallway snoring. The was the most unbelievable thing I have ever witnessed. We went to see our 2 children that are college students and the motel experience ruined our whole weekend. I wanted to know how much my bill was but they were unable to give me a receipt. ARE YOU KIDDING ME! If this is a travel lodge I will promise you we will never stay at another one. Wyndham rewards, we have lost all faith in you as well. We saw a sign that said this was the newest Travel Lodge, do you not have any standards? This facility not only should not be branded, it should be closed until brought to some sort of standard.
Okay 5,0
Ulemper: We had a king size room. The bed was comfortable but short on pillows and bedcovers to fit the bed. Our room was close to the laundry facilities, the ice dispenser was out of order and the room had old picture hanging nails and hooks still left in the wall with new pictures hung nearby. Thank goodness there was a miniblind and curtain on the window. The room door inside was well worn in the latch/lock area. I did not feel safe even though I used the deadbolt and chain and the room was so near the outside doors. 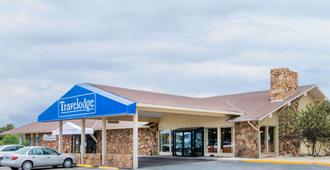 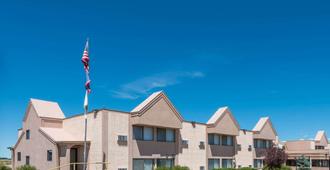 Rangeret #14
Econo Lodge
6,1
God 6,1
Baseret på 112 bedømmelser
Detaljer
Vurderinger
386 kr
Se tilbud
Ramada by Wyndham Laramie
Se alle detaljer
Renlighed
5,1
Comfort
5,4
Beliggenhed
5,9
Tjenester
4,2
Ansatte
5,7
Samlet 4,9 Okay
Baseret på 195 bedømmelser
Alle anmeldelser
Renlighed
5,1
Comfort
5,4
Beliggenhed
5,9
Tjenester
4,2
Ansatte
5,7
God 6,6
Ulemper: Trak fra mit kort flere gange for kun én nat.
Middel 2,8
Fordele: The staff was very helpful with locating a pool for me and my daughter.
Ulemper: Everything!! Bed was like sleeping on the floor, pool and spa were out of order, ceiling was falling apart, tub and shower fixtures were not mounted to the wall! very difficult to find more than one useful outlet. When me and my daughter travel we always find a hotel with a pool so we can enjoy the stay but when we found out the pool was out of order it was a major let down.
Middel 2,0
Ulemper: This place was very bad the pictures were not like the real thing we got there and the first room and pills on floor and a vial of something and TV was on so got another room and the fridge was about to fall over and overall I didn't feel safe there the pool was closed and floors were nasty and the pop machines had huge wholes in them this place looked like a drug motel very nasty I would not stay there we ended up going into town and got another motel don't waste your time and money here were are out the money we left the keys in the room and left
Okay 4,0
Fordele: The afternoon front desk person was exceptional. She was attentive and helped us out. We got the room for the pool so we could have a birthday party. The pool was out of order and my room was non refundable. She let us use the breakfast area for cake and presents.
Ulemper: The photo copy of my credit card is ridiculous. The room was extremely run down. The tub did not drain. The pool was out of order yet on no website did it say anything about that. Ramada.com or the travel website I used.
Middel 3,1
Fordele: Easy access
Ulemper: Too many creepy, scary, and annoying things to list in only 100 characters. Don't stay here!
Middel 2,8
Fordele: It took 30 mi Ute to check in because the clerk couldn’t remember which rooms she had already placed guests in. The WiFi didn’t work. Breakfast was below average at best and everything was cold. I’ve never had coffee as bad as theirs, the pancakes and milk were both spoiled.
Ulemper: I couldn’t retrieve a receipt at the time of checkout because of their system being down.
Middel 2,0
Fordele: I don't think there was a single thing I liked about it
Ulemper: It was old, run down, dirty, trashy, disgusting.