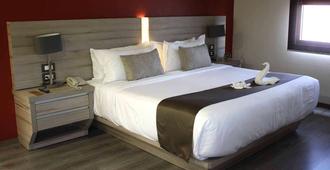 Rangeret #1
Domun Hotel
9,2
Fantastisk 9,2
Baseret på 451 bedømmelser
Detaljer
Vurderinger
412 kr
Se tilbud
Hotel Dos Patios, Holístico Boutique & Spa
Se alle detaljer
Renlighed
9,2
Comfort
8,9
Beliggenhed
9,6
Tjenester
8,7
Ansatte
9,4
Samlet 9,1 Fantastisk
Baseret på 83 bedømmelser
Alle anmeldelser
Renlighed
9,2
Comfort
8,9
Beliggenhed
9,6
Tjenester
8,7
Ansatte
9,4
Fantastisk 10,0
Fordele: I loved that it was very clean, close to good restaurants, in a safe area, and it's actually a Holistic Hotel meaning that they have sacred geometry and nice relaxing/spa music and the colors are aquas and blues which make the place very soothing, perfect to relax, the staff was also very friendly and courteous, the rooms were very clean as well
Ulemper: The only thing that was a bummer was that they don't serve food at the hotel, but there are plenty of good restaurants in the area, so it wasn't a big deal
Fantastisk 8,0
Fordele: The staff at this hotel was exceptional. They made us feel so welcome, and could not have been more friendly, efficient, attentative, and concerned for our comfort. The hotel is a lovely boutique hotel, beautifully furnished, very close-3 blocks- to the Centro-the historic district with beautiful plazas, churches and historic buildings, lots of good restaurants and shops.
Ulemper: No

Rangeret #2
Hotel Dos Patios, Holístico Boutique & Spa
9,1
Fantastisk 9,1
Baseret på 83 bedømmelser
Detaljer
Vurderinger
621 kr
Se tilbud
Hs Hotsson Hotel Queretaro
Se alle detaljer
Renlighed
9,1
Comfort
9,2
Beliggenhed
8,8
Tjenester
9,0
Ansatte
9,0
Samlet 8,9 Fantastisk
Baseret på 269 bedømmelser
Alle anmeldelser
Renlighed
9,1
Comfort
9,2
Beliggenhed
8,8
Tjenester
9,0
Ansatte
9,0
Fantastisk 10,0
Fordele: Værelserne er godt udstyret, moderne og komfortable.
Ulemper: Sengene er lidt for blød.
God 7,7
Fordele: Great restaurant
Ulemper: The rooms were too small, gym too basic, min bar had free beverages but I still had to pay for many water bottles because it was not restocked frequently enough. About 60% more expensive than Fiesta Inn Cento Sur but not worth it.
God 7,1
Fordele: I love the Hotel itself, it's very modern, very clean, bell services, front desk and the bartenders were all very kind and did their best to accommodate me during my 9 night stay. Room service was absolutely horrific, but they did manage to give me two complimentary orders for their shortcoming. However, the good stops there.
Ulemper: I ordered room service everyday at least once a day and something always seemed to go wrong. Everything was right on the ticket, but the cooks seemed to not care about the quality of the food they produced. For example, I would order pancakes one day, and they would come with a side of fruit. The next day, I ordered pancakes again and they didn't come with fruit and were cold. In another instance, I ordered breakfast and asked for a smoothie which includes strawberries. They ran out of strawberries so instead of telling me that and asking me if I'd like to order something else, they bring me a completely different smoothie the doesn't include strawberries. Their reasoning is that they didn't have strawberries and they took initiative by providing an alternative. That left me speechless. But the worst of all from room service was one night when I placed an order. 30 minutes later, I called about my order and they told me to give them 10 minutes. After another hour passed I got impatient and went downstairs to complain. When I came back, my food was finally in my room and their explanation for the long wait was that they never received an order in their system. Now, housekeeping... Never in my life had I dealt with such terrible housekeeping. Everyday, I would hang the housekeeping sign on the door and call the front desk requesting housekeeping as I left my room to explore the city. When I would come back to the Hotel, I would come back to a dirty room that was never cleaned. I had to change rooms twice due to coming to a dirty room in the middle of the night. Then when my room would get cleaned, the same dirty wet towels I had used the day prior, would be rolled up and put up in the bathroom instead of being replaced by clean towels. Same thing applied with the sheets. Beds were made but sheets weren't changed. I had to call them to change my sheets and towels a couple times. This is a very nice hotel, but their housekeeping and room service are the worst I have ever dealt with. I would come back to this hotel, but not until their housekeeping and room service improves. 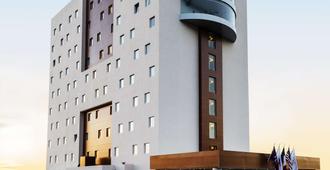 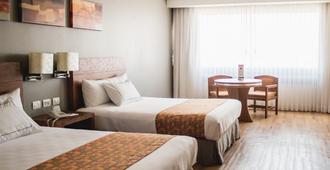 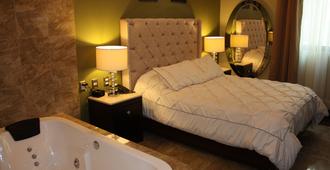 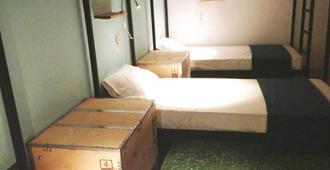 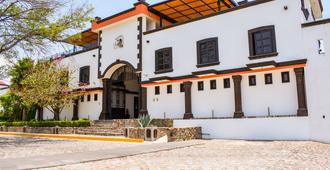 Rangeret #14
Ibis Queretaro
8,1
Fantastisk 8,1
Baseret på 1.149 bedømmelser
Detaljer
Vurderinger
330 kr
Se tilbud
One Queretaro Aeropuerto
Se alle detaljer
Renlighed
8,0
Comfort
7,5
Beliggenhed
7,4
Tjenester
7,4
Ansatte
8,0
Samlet 7,7 God
Baseret på 284 bedømmelser
Alle anmeldelser
Renlighed
8,0
Comfort
7,5
Beliggenhed
7,4
Tjenester
7,4
Ansatte
8,0
God 7,7
Fordele: Location is closest to the QRO airport, so convenient to that. Bright and cheery design. Very pleasant lobby and front desk personnel. Nice bed.
Ulemper: There are two sides to then hotel: the front and the back. My front room was on the major DF highway with tons of trucks all night: LOUD!. The back side, where my business partner roomed, was very quiet: Ask for the back side. The hotel is alone on the highway; there is nothing near it all. Very good for travelers needing to make an early flight out of airport: $150 pesos taxi to airport ($10 at Mar '15 exchange).
Okay 5,1
Fordele: Clean hotel, free breakfast (decent to good fresh fruit and hot courses available), WiFi, fast elevator, friendly staff, very inexpensive, close to the airport.
Ulemper: All the good things are out weighed by the location. The hotel is just off highways 57 & 100, which should be good, but is not. It is just very, very difficult to reach as the highway exits are off dirt roads that are poorly or unmarked and unlit. Even with GPS it is very difficult to find them at night. Out of 10 Uber and taxi rides, our drivers missed the turn-in 8 times -twice because parked big trucks were blocking the route. Uber will not pick up anywhere within a couple miles. You must call a taxi. A restaurant (La Esquina Gaucha) is located next door. The rest of the complex is empty. The food at the restaurant is a fixed 4 course meal with buffet. The food is mediocre to okay. There is nothing else within walking distance.